The Poetical Works of John Milton with Notes of Various Authors

"John Milton, son of John and Sarah Milton, was born on the 9th of December 1608, at the house of his father, who was then eminent scrivener in London, and lived at the sign of the Spread Eagle (which was the armorial ensign of the family) in Bread-street. The ancestry of the poet was highly respectable." And so begins the life of prolific English poet John Milton whose work both mystical and poetic would span 6 decades and go on to influence philosophers, theologians, poets, and historians. His much beloved and controversial epic poem Paradise Lost played a central role in the development of comparative religion as it incorporates elements of classical mythos, cosmology and philosophy into the predominately Judeo-Christian Eden myth, the origins of which can be found in ancient Babylonian myth. Classical themes would emerge again in his mystic, pastoral poem Comus, inspired by the Greek god Comus, the son of Bacchus and representation of chaos. 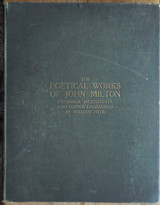 THE POETICAL WORKS OF JOHN MILTON, illustr by Richard Westall - 1794